A Thermal Pipe Package is a Economy-Hydrant Assist Kit (E–HAK) that comes with a 1″ PVC supply line and heat tape. It comes fully assembled and is available in any length. All you have to do is attach it to your waterline.

Thermal Pipe Packages were developed to work under livestock watering systems. They are also useful under mobile homes, homes without basements, and lake cabins. 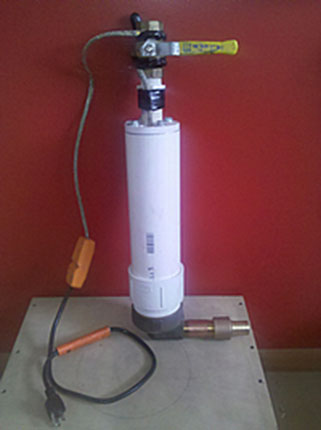 Custom built to meet your needs! Available in any length!

While any livestock waterer or mobile home could benefit from a Thermal Pipe Package, they solve the most problems in situations like these:

Bill and Sue own a mobile home park. Its water service used to be from hydrants. They had problems getting the hydrants to shut off after being open for long periods of time, and they would sometimes freeze up when the weather got bad. With those problems in mind, they have chosen Thermal Pipe Packages to supply the homes. Shutting the water off is now easy not to mention they never worry about the lines freezing up. Sue simply plugs them in when the weather gets cold. Bill even added Universal Check Valves to some sites that weren’t being used so he could remove the supply line but still have access to the water main when he wants to reactivate the site.

Bill and Sue used to tell their residents to leave a small stream of water running to keep the hydrants thawed during cold snaps. After they made these upgrades, they realized they don’t need to waste any water; they just plug the Thermal Pipe Package in to keep the line thawed.

Glen and Bob own a farm together. They have many livestock waterers installed and farm some cash crops as well. Bob used to have to shut the well down to change the valve on one of their waterers. Glen would have to wait to fill his spray barrel because the water was shut off. With a Thermal Pipe Package and Universal Check Valve Bob can shut the water off to just one waterer at a time. This conveniently allows Glen to fill his spray barrels whenever he wants.

Bob also had installed many of his livestock waterers with the thermal tube that the manufacturer recommended. Despite installing it properly it has still frozen in some extreme cold weather. He discovered Thermal Pipe Packages and now he installs them exclusively because the last thing he wants to be doing on the coldest days of the year is trying to thaw out the supply line under his waterer.

Stan has spent his whole life raising livestock. It’s time for him to retire. He has a livestock waterer with a Thermal Pipe Package installed that he will no longer needs. Having water at the site is important to him. Now he can simply remove the waterer, unscrew the PVC supply line from the thermal pipe package and screw a yard hydrant into the Hydrant Assist Kit. Now he can sell the used waterer to his nephew and have a hydrant out there when he wants to fill up his dog’s dish. Stan now has one less headache to deal with in retirement.